Once again we are focusing on data for the Midlands and Birmingham Court in particular albeit, as we demonstrated in past articles, the Birmingham/Midlands phenomenon is not unique.

The easiest visual way to compare the two sets of data is via a line graph.

The way data is recorded by the Ministry of Justice changed in the middle of 2nd quarter of 2014. A change from residence orders to child arrangements orders explains the reason in part, as does the making of the new family court (where family proceedings courts and family cases heard in the county courts became centrally administered and data then centrally collated for each new, combined court).

MoJ data for residence orders changes dramatically from 2nd quarter 2014, and we imagine this may be due to coding changes or data corruption. To give an example, data for Birmingham Family Court records 1,059 residence orders having been made in the final quarter of 2014, yet only 348 between January and March. Due to the considerable anomaly and restructuring of the court, we don’t feel we can trust residence related data beyond 1st quarter 2014.

A picture tells a thousand words. Perhaps more so with this one… 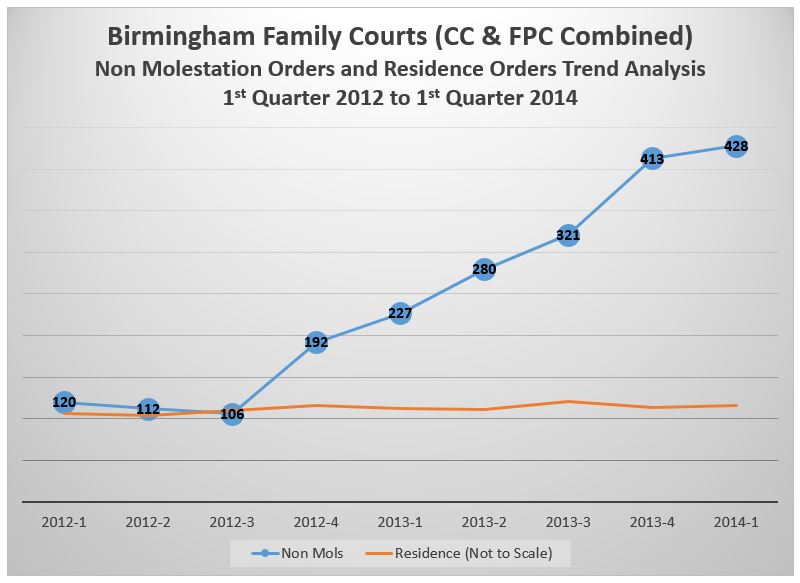 In Birmingham (Family Proceedings Courts and County Court numbers combined), statistics show no significant increase in residence order applications between the start of 2012 and March 2014. The highest number in any one quarter was 361, and the lowest 310. A variance of 16%. Compare this to non-molestation orders in the same period, where the variance is over 300%, with growth every quarter since October 2012.

Data for the Midlands Region as a whole shows a similar pattern. 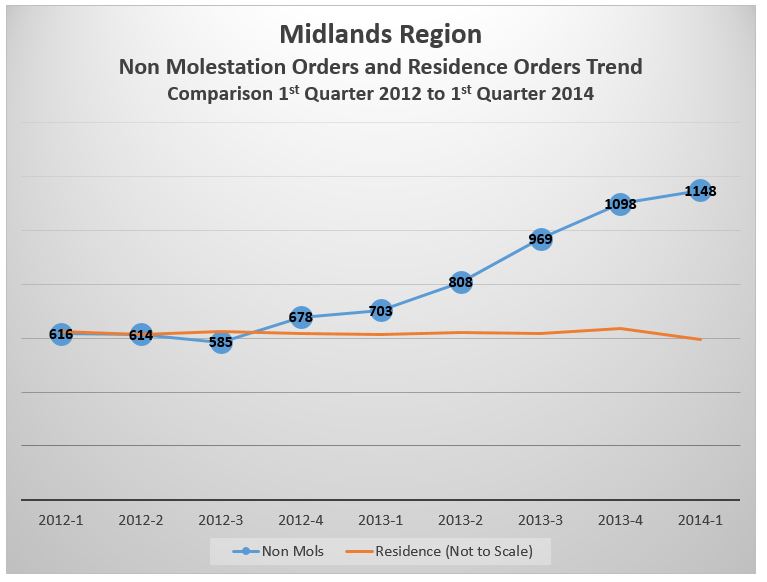 Our experience is that false allegations are commonplace in family proceedings. With the loss of legal aid for the accused but not the accuser and the fact that nationally, 60% of non-molestation orders (in 2014) were made without the accused being present in court, the potential for injustice is profound. Could this last statistic explain why so many more non-molestation orders are being made? We only have the split between ex-parte and on notice hearings for non-mols in 2014. A comparison with 2012, before legal aid was limited to alleged victims, would be interesting.

Today we saw data released that 1 in 20 children were subject to referrals to social services (in the year to March 2014). We can’t help wondering how many of those referrals didn’t involve an abused child, but domestic violence, where those alleged to be victims in court turn out to be parented by a party seeking advantage in proceedings through false allegations. … a referral to social services being one more tool in their kitbag. The system is open to abuse and manipulation and the unrepresented party at risk of significant disadvantage. Taking that factor into account, it would be fascinating to see the extent to which allegations are found to be false at fact finding hearings, and what the court does about it.