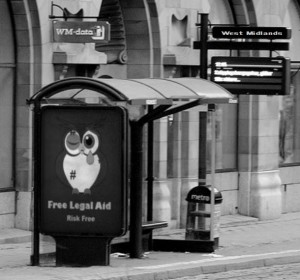 There’s something odd about the Midlands

London appeared to have no significant increases in applications. Then we looked at the Midlands. At first glance, something very strange appeared to be happening. So we thought we’d take a closer look.

Since LAPSO was introduced part way through 2013, it made sense to us to compare data from 2012 (a year when legal aid had been available throughout the year) with 2014 (when the entire year was subject to legal aid restrictions).

We further narrowed this down, as data was provided in two different formats. We did this to make it more likely we compared ‘apples with apples’ when comparing annual data, so included data for the first halves of 2012 and 2014 alone. Data for the second half of 2014 drew no distinction between whether applications were made in the Family Proceedings or County Court.

Did the data throw up some surprises… not half!

London showed a modest drop in non-molestation order applications (across all courts) of 2%. From that, one might assume that pre-LAPSO fears that false allegations of domestic violence might be encouraged to secure funding (the system might be abused) appeared not to have borne fruit. Similarly, the counter fear that the requirement to provide some evidence of domestic violence (as a prerequisite to achieve funding) might stop victims from applying seems to have been unwarranted.

All’s well and good then? In London perhaps… in other areas of the country, things look very, very different. 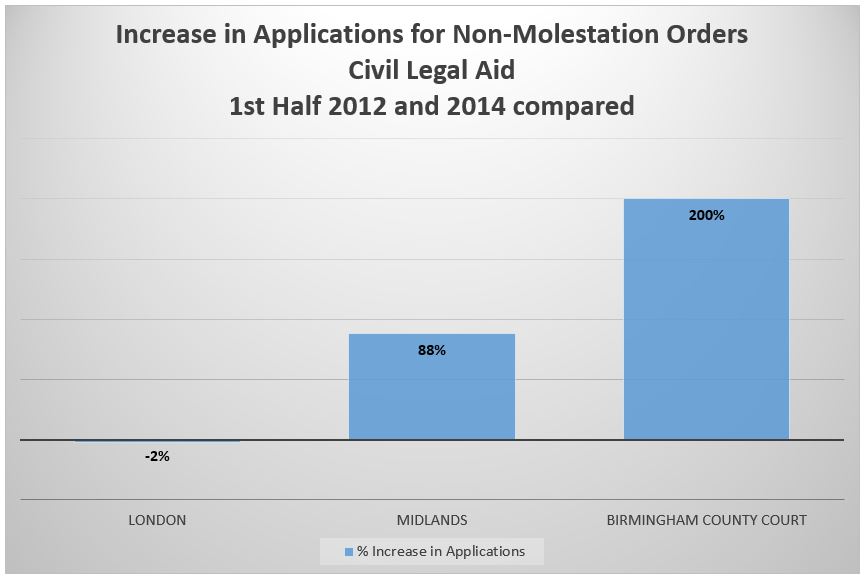 Spotlight on the West Midlands

The MoJ stats show applications for non-molestation orders in the Midlands as a region have increased by 88%. Head into certain areas, and the increase is quite, quite staggering. Birmingham County Court, an increase of 200%, Birmingham Family Proceedings Court… 775%. 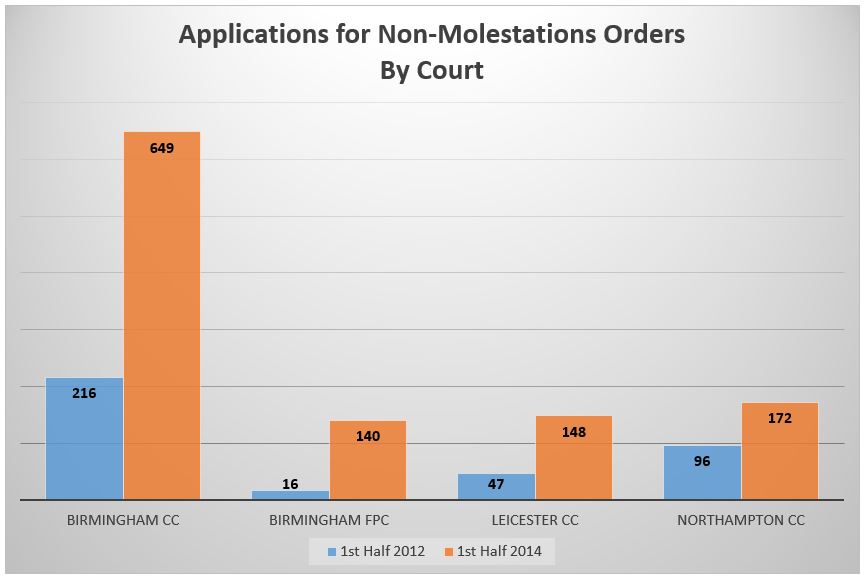 The above graph just gives a highlight, and the pattern is reproduced across courts in the Midlands: 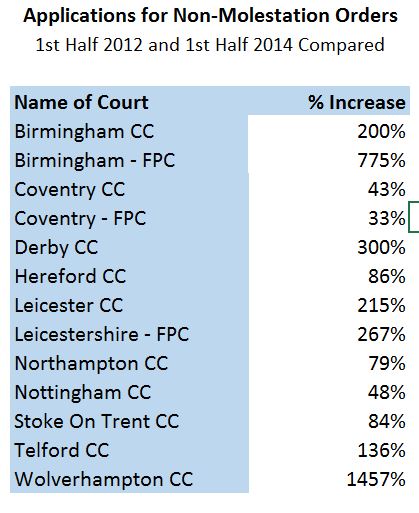 Before people start claiming there is systemic abuse of legal aid by the legal profession, we’ve seen other data which suggests that applications for non-molestation orders are dominated by literally a handful of firms in the West Midlands (although don’t have the data for other courts). That data shows 81 firms having made applications for Non-Mol orders in the region in 2014, however 3 firms appear to account for two thirds of applications (where a law firm was identified) from the sample data received. The weirdest thing about the solicitor firm data is that those three firms collectively are recorded as only being involved in one application for non molestation orders in the West Midlands in 2012, but 513 in 2014.

It is plausible that in the days of the rise of ‘super’ law firms, you would see competition, mergers and corporate marketing budgets increase market share. However, that doesn’t explain the increase in applications in the region over all. Could it be that dialogue scripting for call centre staff account for the increase? It’s possible, but other possible reasons exist. There may have been a shift in advice from organisations which refer clients to law firms.

In the event that 2012 data was understated, data collection methods improved in 2014 or similar, you might see the same trend in London too, but you don’t. Could work have been shifted from other courts in the Midlands to Birmingham? Possibly, but across the entire Midlands region applications for non-molestation orders increased by 88%. There’s always a possibility that MoJ data has been corrupted so we’ll caveat our analysis with that old accounting abbreviation E&OE (errors and omissions excepted).

Should we be concerned? Yes. Non Molestations Orders are routinely made without the other party being present. Once granted, they provide the opportunity to secure legal aid in other family proceedings as evidence that domestic violence is a factor (when this was never defended against). They are draconian orders but necessary to protect genuine victims of domestic violence. It is, however, quite simple to gather supposed ‘evidence’ of domestic violence to secure legal aid where no history exists. One family law adviser recently told me that in Birmingham, non-molestation orders are handed out like bus tickets (his words) which pricked my interest when I saw the FOI data appear in my inbox. If the system is abused, those falsely accused become the victims, limited services get diverted from genuine victims of domestic violence, and the legal system and public purse become tools of abuse against innocent parties.

While England’s first and second largest cities are only separated by 100 miles, the numbers suggest they’re worlds apart and something very odd is happening across the Midlands. We’re making no allegation that firms are abusing the system, however the stark difference between the two regions seems worthy of detailed investigation.