I thought I’d have a look at the actual statistics and contemplate what that means for child welfare.

The current statistics bear out that being unrepresented does not lengthen proceedings. Was this the case before legal aid cuts (remembering that some people back in those seemingly halcyon days couldn’t afford a solicitor and didn’t qualify for legal aid)? On the whole, yes, so no-one should be surprised. 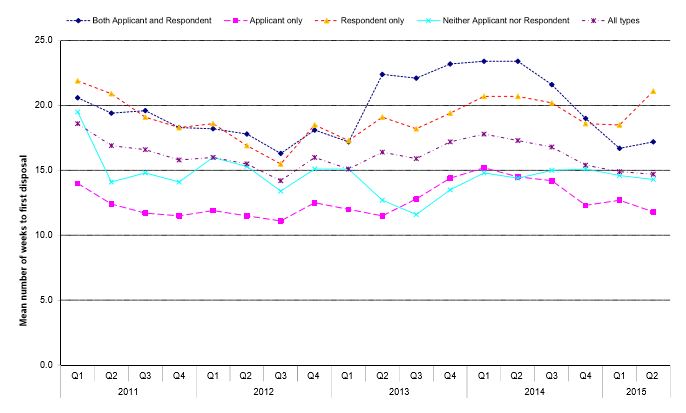 Part of the reasons for the figures being as they are is that in some instances, the courts take an early inquisitorial approach leading to matters being resolved early. In others, I suspect that the opportunity for adequate investigation and challenging of evidence is absent when litigants-in-person don’t press for this. These time savings then being offset by proceedings which turn into a shambles as parties fail to turn up, fail to file evidence as ordered and similar.

Litigants-in-Person and the impact upon court budgets

In reference to the HMCTS statement that a lack of legal representation has not impinged upon the court’s budgets, could there be any other reason budgets aren’t stretched and courts over-worked following court closures? Statistics published by the Ministry of Justice show applications in private family law proceedings have fallen from a high of 15,000 a quarter to a little over 10,000. This might better explain why (even with court closures due to cuts) workload hasn’t increased overall and there isn’t a budget problem. Other family court work has either remained fairly stagnant, or fallen. Little wonder then that budgets haven’t risen ‘due to litigants-in-person’. Anyone for a piece of fudge?

Could a less palatable reason for capacity be that, without legal representation, the courts have become less accessible? 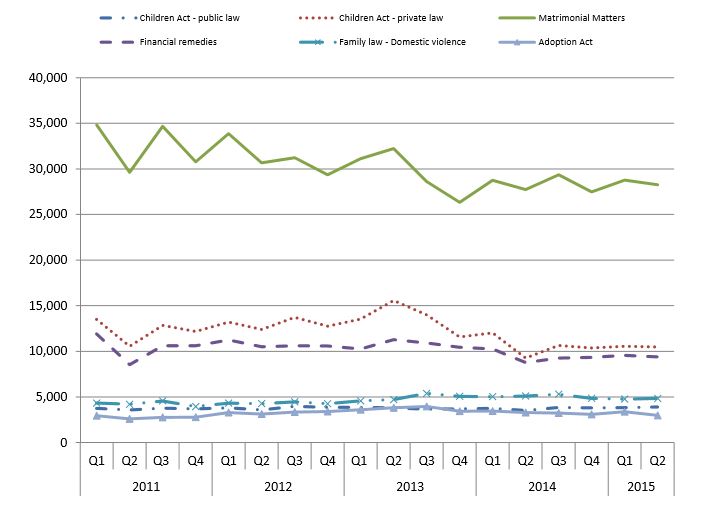 The figures suggest that some 10-20,000 families a year who might have approached the court, now don’t. Might they be using mediation instead? The statistics suggest they’re not (April 2013 saw the introduction of legal aid cuts). 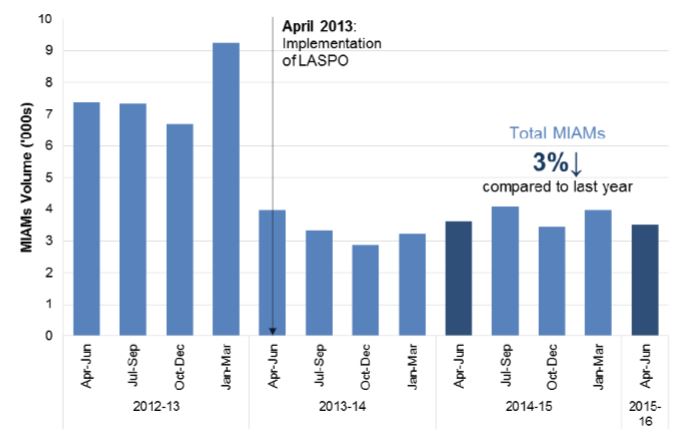 Rather than 10-20,000 cases a year having shifted to mediation, they’re joined by another 15-20,000 families lost to mediated dispute resolution.

Just to share a particular gem of gordian knot policy making, did you know that the March 2015 Legal Aid Family Mediation Guidance states “in order for a matter to fall within the scope and remit of publicly funded mediation there must be a legal dispute present. It is not sufficient for there simply to be a dispute between the parties that if left unresolved could lead to a legal dispute and the potential for family proceedings being issued.” So while trying to get parents to think mediation, they have to complete court application forms? Does that strike anyone else as daft or process intensive, and the person needing legal aid for mediation will also need to apply for an exemption regarding the court fee. See… there’s a bit of cash HMCTS could save by taking the court out of the mediation loop entirely!

The statistics for legal representation

The next graph from the MoJ shows whether a party was represented during proceedings. Latest figures show only 22% of cases having representation for both parties. In 31% of cases, a solicitor wasn’t present at all. In 47% of cases, one party had the benefit of representation while the other did not. 78% of cases involved at least one of the parties not being represented. Bear in mind figures for represented applicants will be skewed somewhat because those alleging domestic violence do still qualify for legal aid. 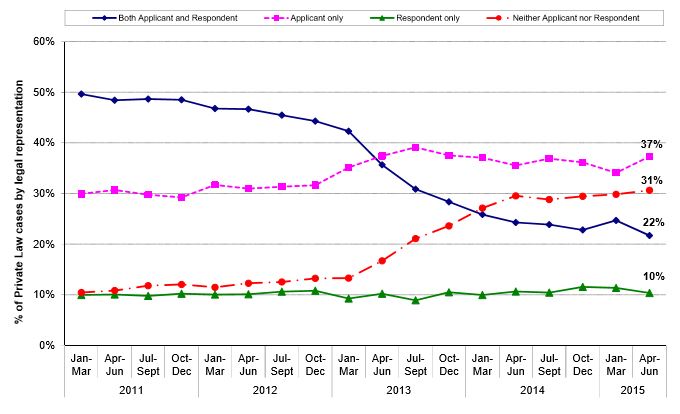 At face value, it may appear that fewer parents attending court and shorter proceedings is a good thing. That assumes that disputes are being resolved, and that when resolved, the arrangements being made are in children’s best interests. Are the right decisions being made? Having seen complex cases allocated to magistrates including leave to remove and enforcement (where decisions previously made by circuit judges were changed with a lack of reference to earlier proceedings), I’m not confident. Do most litigants-in-person have the skills to lodge an appeal or understand when judges have erred in case management?

In 2013, Christian Guy, Director of the Centre for Social Justice said “For too many children growing up in some of the poorest parts of the country, men are rarely encountered in the home or in the classroom. This is an ignored form of deprivation that can have profoundly damaging consequences on social and mental development”. At the same time, the CSJ estimated 1million children were living in a fatherless society. Whether fatherless or motherless, children experience harm when denied a relationship with both parents. As far back as 2004, Dame Butler-Sloss spoke of 40% of children losing contact with a parent within 2 years of separation.

HMCTS statistics strongly imply that the situation has become worse as fewer disputes reach court or mediation with the poorest in society most affected. This, I suggest, is not something for Government, the Ministry of Justice or HMCTS to celebrate. Stable court budgets and shorter proceedings don’t answer the question “is the family court meeting the needs of society?” Shouldn’t someone be asking why the punters aren’t coming through the doors.

Bizarre as some may think, it would be a positive thing for far more cases to come before the Family Court. Then, perhaps, those million children may not be deprived of a relationship with their parent (and vice versa). Lower state spending isn’t always a sign of success.

Resolution, take a suggestion from a seasoned old campaigner. Rather than looking at the impact of legal aid cuts on members, focusing on the harm caused to society and the impact upon children might win you more support and be harder for Government to dismiss.