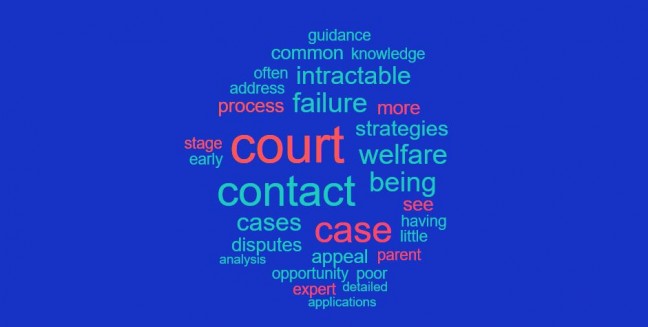 Rather than intractable contact disputes being complex, these are often cases made complex by poor investigation, inadequate welfare analysis and failures to apply and carry through strategies from an early stage. These are common reasons for failure, and the saddest thing of all is that none of these should come as a surprise.

Over reliance on the litigant-in-person’s legal abilities: Unrepresented parties are expected to understand and argue matters for which they lack the skill and understanding. Prime examples in intractable contact disputes include a failure to ask for the appointment of an expert or a Children’s Guardian when the case peculiarities meet the suggested criteria. Where the litigant possesses the minimal knowledge to ask, they fail to do so in the proper form and have their application ignored or dismissed. Surely the paramountcy principle should trump procedural niceties?

Is it realistic to expect Johnny Janitor or Helen Hairdresser to have detailed knowledge of practice directions, or should this knowledge and responsibility rest with the court? If it’s the former, it’s simply unrealistic. Should someone with no experience of strategies for the resolution of intractable cases be expected to propose them, should it be left to the court without any guidance, or should the Family Court be seeking the expertise of psychologists and other professionals to advise on process for the lower courts to reference? I know there exists the argument that ‘every case is different‘, but with a little intelligence, those differences can be largely categorised with process driven strategies provided.

Should the litigant be asked to propose an expert or therapist? Does a list of approved, suitably qualified and experienced therapists exist? If not, one wonders why not? Little wonder that the outcomes of intervention are uncertain when there appears to be no quality control, and a matter made worse when the subject matter ultimately has long term implications on a child’s mental health and identity.

A further bone of contention are litigants-in-person being afforded no opportunity to agree or even see preliminary documents such as the chronology, statement of issues, skeleton argument or case summary which are then included in the court’s bundle. Again, not a universal problem, but it happens too often. The litigant-in-person only being given an index which bears no mention of these documents and then being left to compose a bundle for their own use. When asked if they saw a copy of the preliminary documents (let alone had the opportunity to agree the contents) they are oblivious. Worse, the version of the index supplied to them contains no mention of these.

While I know people found the early 2014 draft court orders long-winded, shoddy directions make more detailed draft orders necessary. Having seen directions which omit filing dates for statements or any arrangements whatsoever for agreeing the bundle and the full contents, I’d be amending CAP03 and ensuring that abbreviated versions weren’t allowed. The argument ‘it shouldn’t be necessary‘ is defeated by the sad reality that it is!

Other themes even more common? Unrepresented parties hijacked with new applications (an example being s.91.14 applications) or documents (statements, welfare reports, or evidence) on the day of proceedings, which the court allows. There’s enough case law on such matters to inform the court that such things shouldn’t be happening, but they do. A case this month, E v M [2015] EWCA Civ 1313 including a reference to Wilson LJ’s comments from 2009 that the Court of Appeal “spends a surprising and unfortunate amount of its time in reversing orders made on the inappropriately summary basis here exemplified.” A nice way of complaining “how often do we have to bloody say it“. Six years on, the court of appeal has to, because the message doesn’t filter down! The nature of appeal means Lords Justice of Appeal only see the tip of the iceberg, compounded by litigants-in-person not having the tools to lodge an appeal, nor the knowledge to even understand there’s an appellable point to argue.

That latter point is the saddest. Too many people remain ignorant that there have been case management failures, because no one tells them that there have. In intractable contact disputes, the greatest failure is often a statutory failure to explore and consider the full range of strategies available to the court.

Case Allocation: Too many cases are being allocated to the wrong level of court, with the Designated Family Judge at regional level failing to follow 2014 Gatekeeping and Allocation Guidance. Magistrates lack the necessary knowledge or advice to manage these cases effectively which sees proceedings unnecessarily prolonged, or worse, brought to a precipitous conclusion. The opportunity for detailed welfare investigation at an early stage is missed, to call for expert evidence, to appoint a guardian, re-establish contact at an early stage and attempt a variety of strategies is missed. Examples of gatekeeping breakdown I’ve seen in 2015 include applications for enforcement of orders made at circuit level being heard by magistrates, leave to remove applications being heard by magistrates, intractable and complex cases featuring alienation being heard by magistrates. Wrong… wrong… wrong.

Poor Welfare Investigation and Analysis: A factor seemingly more common in section 7 reports is a failure to give adequate consideration to parts 1(3)(a), 1(3)(b) and 1(3)(g) of the welfare checklist when conducting the welfare analysis and making recommendations. In simplistic terms:

I suspect the reasons revolve around resourcing and training.

A failure to appoint a Children’s Guardian: In intractable contact disputes and ones where there is evidence that the child’s wishes and feelings are negatively influenced by the resident parent, the appointment of an experienced Guardian at an early stage is very valuable and not least to ‘ascertain‘ the children’s wishes and feelings (when they appear irrationally held). “We can’t get Johnny to walk through a door to see his non-resident parent, so we recommend indirect contact only” seems an increasingly common theme despite a lack of rational reason and absent any thought of counselling or attempt at strategies to address the resident parent’s negative influence.

No strategy applied to non-compliance: It astounds me when I read a case and see the court having given up on re-establishing contact, when they’ve taken no steps whatsoever to address a primary carer’s refusal to comply with directions for contact, therapy or the child’s attendance at supported or supervised contact. The opportunity to re-establish contact at an early stage or use supervised or supported contact as an investigatory/assistive measure fails simply because the residence parent says “Johnny won’t go” or refuses to take him. The court really must remove the belief that it adds the words ‘if it please milord or milady‘ to the end of their orders.

Blaming both parents in judgment for the failure to promote contact and drawing on Larkin quotes ‘they fuck you up, your Mum and Dad‘ (the popular way of saying ‘it’s not our fault, it’s yours‘) is simply not good enough. This has been a theme in several appellate judgments where analysis of the case history shows inadequate case management, little judicial continuity, little expert input and an absolute failure to address an alienating parent’s abuse of the child and their relationship. It’s like the NHS saying “it’s not our fault the patient died… we didn’t stab them” despite doctors having failed to treat the wounds or notice the gangrene setting in. See our earlier article on H-B [2015] EWCA Civ 389 which provides a classic example of case management failure and the court making excuses and hiding from responsibility.

I like Munby, and respect much of what he’s done, but in that judgment he lets himself down and misses an opportunity to address failings in the Family Court which are repairable but are key components in poor outcomes. Better quality management, communication and more detailed and accessible process guidance could dramatically improve matters, and in absence of this, the Family Court seems an amateur and disorganised institution which too often fails in its duty to protect child welfare.

I could go on and on, but if I do I’ll be repeating the criticisms which you can read in the article on H-B [2015] EWCA Civ 389. What this article highlights is that the problems evident in H-B continue to go unaddressed and are not unique. A first step would be to have specific practice guidance in relation to intractable contact disputes which draws from the best common law guidance from the most able of our senior judiciary and ideally includes expert contributions from the likes of Professor Berelowitz. That’s my hope for 2016 and one which could be achieved with sufficient commitment.