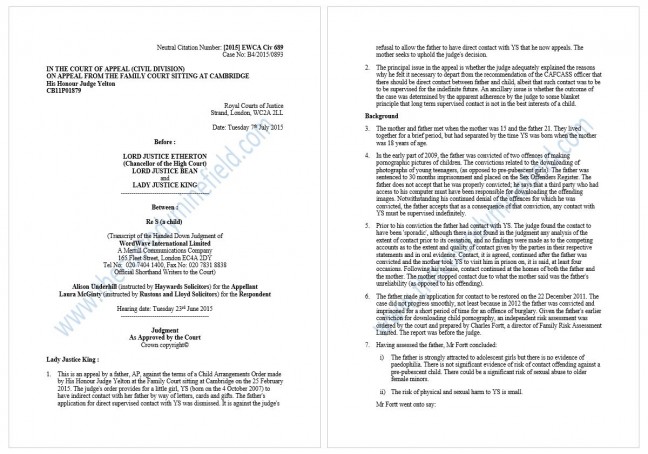 The father sought an order for direct supervised contact but this was refused. The principle part of the appeal related to the judgment having departed from the CAFCASS recommendation of supervised contact and the lack of reasoning given to explain why. The father’s appeal was successful and the matter was referred back for rehearing.

The case was made more complex by the father’s having convictions for downloading pornographic images of children, a matter he continues to deny claiming a third party had access to his computer. The issue of contact being supervised was not contested by him and the father further accepted the CAFCASS recommendation and he did not seek matters moving to unsupervised contact. Investigations had identified potential risk in relation to adolescent girls. The mother had stopped contact, not because of his offending, but due to alleged unreliability.

The child had told CAFCASS she wanted to see her father, albeit her views had changed following an argument over an X-Box which was recorded in a risk assessment.

The judge’s reasoning for refusing supervised contact was the supervision being on a long term basis rather than being a short term introductory measure. Two further reasons were given that it would disturb both the mother and child. Counsel for the father had sought clarification from the judge, asking him to explain his decision against section 1(3) of the Welfare Checklist. The judge had replied saying he saw no need for this and his three reasons were sufficient.

Of particular note from Re S is the appellate court’s observation from paragraph 23 in relation to long term supervised contact and there being no principle against this arrangement in law (albeit there may be practical problems):

“23. There are and will be cases where long term supervision of contact is in the interests of a child – examples which immediately spring to mind are children placed in long term foster care by the courts but who continue to have supervised contact with their parents; or the increasingly common situation, where children are placed with family members following care proceedings and the natural parents continue to have contact supervised either by the local authority or family members. Both these examples relate to public law proceedings but have no less application to private law cases, particularly where there are child protection issues but there is no need of local authority involvement because the caring parent, as here, has proved that they are capable of protecting their child. The reality is that, with ever decreasing resources and the closure of contact centres, long term supervision will rarely be a realistic option in private law cases such as this; that does not mean however that in an appropriate case such a route should not be deployed as a means of allowing a child to continue to have a relationship with her absent parent.”

The appellate court also made reference to guidance from Re M (Children) [2013] EWCA Civ 1147 and Re R (A Child) [2014] EWCA Civ 1664. These two cases, in essence, give guidance that contact is almost always in a child’s best interests as a fundamental element of family life. Also the principle that the judge must take all necessary steps to facilitate contact, as can reasonably be demanded in the circumstances of the particular case.

Also of note is a third case when considering the successful appeal in this case, which comes from the President’s guidance in Re C (A Child) (Suspension of Contact) [2011] EWCA Civ 521:

1. Contact between parent and child is a fundamental element of family life and is almost always in the interests of the child.

3. There is a positive obligation on the State, and therefore on the judge, to take measures to maintain and to reconstitute the relationship between parent and child, in short, to maintain or restore contact. The judge has a positive duty to attempt to promote contact. The judge must grapple with all the available alternatives before abandoning hope of achieving some contact. He must be careful not to come to a premature decision, for contact is to be stopped only as a last resort and only once it has become clear that the child will not benefit from continuing the attempt.

4. The court should take a medium-term and long-term view and not accord excessive weight to what appear likely to be short-term or transient problems.

5. The key question, which requires ´stricter scrutiny´, is whether the judge has taken all necessary steps to facilitate contact as can reasonably be demanded in the circumstances of the particular case.

6, All that said, at the end of the day the welfare of the child is paramount; the child´s interest must have precedence over any other consideration.

To read the Re S judgment in full, click on the following link:

The judgments referred to in Re S already form part of our dedicated Indirect Contact and Suspension of Contact Case Law Library. We’ll be adding the Re S  judgment to our library shortly, as a reference point on the issue of there being no principle in law against the making of an order for long term supervised contact to mitigate identified risks.

The lower courts on occasion contemplate orders stopping direct contact where no serious child protection risks have been identified. Knowledge of case law and the upper court’s guidance from recent judgments can help nip that in the bud! The three identified cases (above) – Re C, Re M and Re R – should be memorised for those occasions. We include pdf versions on our site so they can be downloaded, printed and kept in your files. We recommend you do!