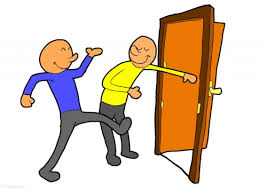 The Law Society has published guidance for solicitors on dealing with litigants-in-person.

This, on the whole, is a welcome step forward. We experience and too often hear of three areas where solicitors’ and barristers’ conduct is unacceptable:

Only last week, I met a friend socially who was assisting as a McKenzie Friend at a local court. As he and I chatted, we observed a man sat opposite us, and the solicitor for the other side who came over and talked to him. “You can’t do that…”, “The court won’t agree to this…”, and other absolute phrases cropped up, displaying a psychic gift for predicting what the court would or would not accept.

I remember assisting a man in the High Court in London, sat in a meeting room with a very pleasant and courteous counsel for the children’s Guardian. The door burst open, and a bundle of fury walked in telling the father what he could or could not do in respect of appointment of expert witnesses and agreeing the witness template. I introduced myself, and after determining who this person was (counsel for the other party), I advised the father that “it is for the court to decide, and while counsel for the other party may object, it’s not for them to say what will or will not happen.” At which point, said counsel stormed back out and the door slammed rather loudly.

Upon entering court, said counsel objected to my presence in the court. No reasons were given. The High Court Judge made very nice comments about me (I was known to her), and said she had no problem with my being in her court. The issue of the late filing of evidence cropped up, where the father had only received information by email at 10pm the night before from solicitors for the other side (despite their having had several months to prepare that information, related to the appointment of experts, and their having missed various filing dates directed by the court). Thankfully, I was staying with him on the night before the hearing and we were able to get a reply emailed back to both the other side and the court at 2.30am (also pointing out the late receipt and the reasons for our late – or early morning – response). Said judge tore the counsel a strip for late filing and a failure in their duty to the court. The issue of my client’s requests regarding evidence came up, and his request was approved. Counsel for the other side’s certainty over what the court would do was somewhat misplaced.

Other judges and magistrates too need to take a firmer approach when dealing with such matters.

I often come across litigants-in-person who complain of only receiving evidence a couple of days before, or on the morning of, a court hearing. It’s not uncommon for them to believe late filing is some form of tactical brinkmanship. In fairness, in most cases, I think it down to inefficiency and being disorganised, or their struggling to get the other party to provide them with information they need. Regardless, it shouldn’t be for the litigant-in-person to have to raise this with the court. The solicitor should notify the court (copying in the litigant-in-person) of the fact they won’t be able to adhere to court directions (regarding the filing date), rather than leave it to the inexperienced and sometimes clueless litigant-in-person who ends up wandering into court completely unprepared and at an avoidable disadvantage.

Where evidence is filed late, the court should be notified so that an adjournment can be considered to allow for time to seek advice or at least prepare and consider a response.

Court bundles need to be checked by the litigant-in-person, since occasionally new evidence will appear without the court’s prior consent for that evidence to be filed. Again, the cause of this may be down to matters being rushed rather than professionally managed. Always check the index to the bundle! Wording in the statement of issues, the chronology and summary need checking too for accuracy. If a skeleton argument is submitted, it too needs to be checked (with regard to the nature of case/background, points of law raised and authorities relied upon). These should be accurate and not biased in favour of the other side’s arguments. Where the litigant-in-person lacks the skills or knowledge to put together an alternative bundle (if the bundle cannot be agreed) or skeleton argument, time is required for them to get appropriate help (if that can be found or afforded).

Not all solicitors are the same

Just as with McKenzie Friends, there are good ones and bad ones. It is entirely right that bad McKenzie Friends have civil injunctions made against them to prevent their undertaking McKenzie Friend work, and if a McKenzie Friend is abusive or their behaviour unacceptable the solicitor should raise this with the court and the court should act . No reasonable McKenzie Friend would object and those I have spoken to recently are very much in agreement with Munby’s recent decision over an act of appalling behaviour. 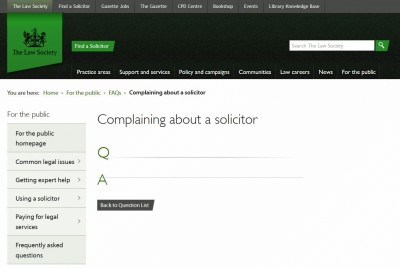 It’s perhaps unfortunate that the Law Society’s Q&A page on complaints about a solicitor is blank and we hope they fix this soon:

Litigants-in-Person should also be aware of the following, and can download the guidance via the links below:

Litigants in Person: Guidelines for Lawyers