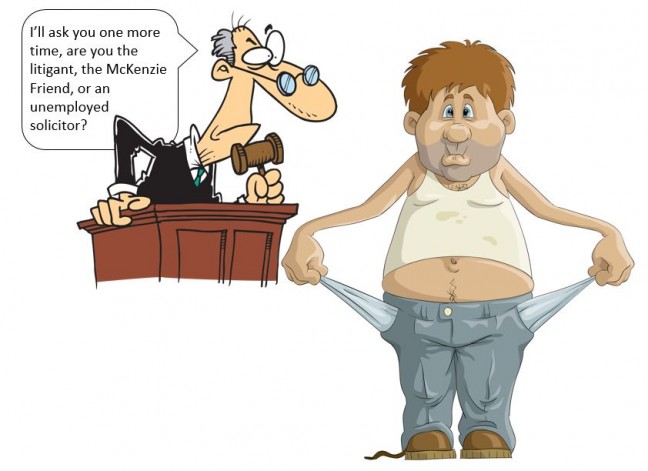 For those unaware, there is a consultation underway to look at whether McKenzie Friends should be regulated, insured and paid.

Dealing with the ‘bad or mad‘ McKenzie Friends issue first. There are a handful of McKenzie Friends out there who shouldn’t be let out without a lead and a muzzle (and one or two ego driven barristers I could mention). Why are they still going into court? Simply, the judiciary haven’t dealt with them as they should. These are the ones (the McKenzie Friends not the judges) who are dominated by anger and bitterness and walk into court with an agenda.  The very simple solution is to make an order barring them from attending court, and judges do have that power.

Those whose advice is completely without merit should also be banned, but this problem also applies to solicitors, hence the current argument and debate about the judiciary applying wasted costs orders to firms of solicitors who fail in their duty to the court. Is the solution to poor advice that all solicitors shouldn’t be paid… if you think that lacks logic, bravo! You’re right, so why is that flawed logic being aimed at McKenzie Friends?

I suspect a large part of the current call for regulation of McKenzie Friends and discussion about banning McKenzie Friends from charging has little to do with quality control. The latter point particularly smacks of protectionism.

The explosion in McKenzie Friends hasn’t come just from legal aid being cut, but the resultant number of family law firms closing over the last few years. Many of the new McKenzie Friends are solicitors made redundant or barristers without pupillage. On the nastier side of the online debate are those in the legal profession suffering from ‘I’m alright Jack‘ syndrome and not giving thought to their peers whose choice is to McKenzie or have their home repossessed.

Is there a need for McKenzie Friends? Yes. For many, legal advice is neither accessible or affordable. There is huge demand for affordable legal advice but the legal industry has been poor in providing services to this market segment. It isn’t only the low paid who need McKenzie Friends, but more and more members of the middle class for whom advice from law firms is beyond their financial means. An example? A father needed an order for an all ports bulletin and for their child to be made a ward of court. I won’t discuss case details, but the cheapest price they’d been quoted by the established legal industry was £10,000 with an estimate of £30,000. Two hours help filling in the forms by phone and drawing up a position statement helped them walk into the High Court the following day and get the orders they sought. The cost… £100. Would the non-fee charging McKenzie Friends have had the knowledge to navigate wardship? Would Citizen’s Advice or other charities have the knowledge to help that father? No. Knowledge among the charity sector is at times (and often) spectacularly poor.

Ability among McKenzie Friends is mixed, but the same can be said about social workers, judges, magistrates, solicitors and barristers. There are those who are committed, objective, analytical and articulate, while others are lazy, subjective, lacking in intelligence and at times monosyllabic. It’s a human nature issue. The worst advice doesn’t come from McKenzie Friends these days but from Facebook, and we have legislation which stops people from discussing their cases online… only it doesn’t.

Remove fee charging McKenzies from the system, and you remove another check and balance against poor advice. Those who offer advice commercially have to offer a reasonable service or else they go bust. They tend to be keenly conscious of the risk of poor advice damaging their reputations. This too is human nature. While there are some poor McKenzie Friends, there are some who are spectacularly good. They happen to be objective, analytical, articulate people sufficiently committed to learn their trade.

Having regulation, insurance and codes of conduct is all well and good, but it isn’t a panacea. Stopping people from charging enough to cover their mortgages is simply stupid. It drives those with capability into other lines of work.

Asking for all McKenzies entering court to sign up to a code of conduct is a good idea. I wrote such a code for the charity Families Need Fathers intended to be signed up to by any McKenzie Friend who wished to advertise with them and assist their members. This was done seven years ago. I updated it last year to make it more prescriptive on the knowledge which the McKenzie Friend should have.

If people want McKenzie Friends registered with an institute which can investigate complaints, that’s not a bad idea. Why reinvent the wheel though? Have them sign up to the Professional Paralegal Register (many already are).

Don’t think for a moment this will stop poor advice being given, whether from the qualified, accredited or man in the street. You can’t teach judgment, impart analytical ability or make people articulate. A certificate or registration membership is no guarantee of quality, good service or commitment.

Have I sympathy for the legal industry and solicitors in particular? Absolutely, they’re stuck between a rock and a hard place with e-justice being discussed, a more tribunal like and less adversarial system being mooted, and this coming after their members have invested years and fortunes into becoming qualified. The direct access scheme is encouraging litigants to dispense with using solicitors and to instruct barristers directly. Solicitors’ children still need to be fed, their mortgages need to be paid. Cuts to legal aid have devastated the industry. Squeeze, squeeze, squeeze. The problem is that those cuts and the tidal wave of change won’t be reversed. McKenzie Friends are a side issue catering to a market who can’t afford mainstream legal advice… the direct access scheme is far more of a commercial threat.

If people hearken back to the days when legal advice was accessible to all and only the brightest minds entered court to give advice, stop dreaming. Those days never existed. McKenzie Friends and paid McKenzie Friends have been filling the gap between legal aid and solicitor led legal advice for many years. During those years, the legal industry wasn’t particularly interested in those who couldn’t afford solicitor legal advice or who didn’t qualify for legal aid. Why not? There was enough work to go around, and I believe it’s that issue which has sparked the current debate and lobbying of the judiciary.

For information related to McKenzie Friends, follow the links below: