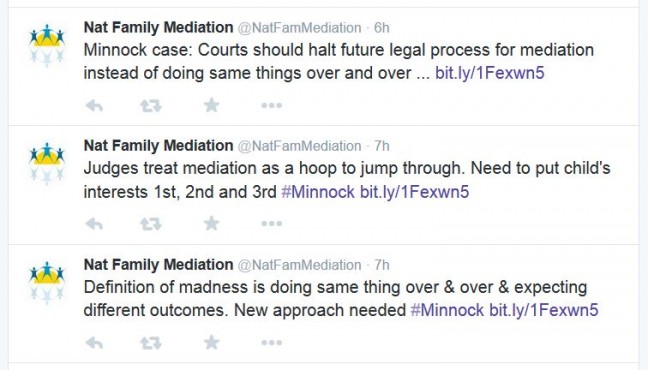 The National Family Mediation (NFM) charity made an announcement last Friday that “Courts considering the case of Rebecca Minnock should halt legal proceedings surrounding the future of her son so mediation can be undertaken to help shape a brighter future for the three year-old, says a leading family charity.” [1] The same announcement has been repeatedly promoted by them on social media with claims:

I’m a fan of mediation. The Custody Minefield website, guides and fact sheets recommend that parents consider mediation. It can save families stress, unpleasantness and the expense of legal proceedings. Mediation though is not appropriate or successful in all circumstances.

In an article by John Bolch in May this year, he comments that “A survey by Resolution, the association of family lawyers, suggests firstly that less than a quarter of cases in which a MIAM had taken place proceeded to mediation, and secondly that of those cases that did proceed to mediation less than a quarter resulted in a settlement.” [2] The MIAM is the first stage of the mediation process and stands for the “Mediation, Information and Assessment Meeting”.

National Family Mediation’s own published statistics are very different, claiming that 8 out of 10 parents who use their family mediation services reach “full” agreement and that they are the largest provider of mediation services in the UK.

Regardless of whose statistics are right, even if the number of successfully mediated outcomes are small, the success in those cases should be applauded, and makes the role of mediation worthwhile. It would be wrong however to assume that every mediated outcome is a good outcome or that the courts do not encourage mediation during proceedings.

As anyone involved with family law knows, at each stage of proceedings there are often lengthy negotiations in meeting rooms while proceedings are paused to attempt to get parents to reach agreement and compromise. Sometimes the judge pauses hearings to permit this, while often (and normally!) hearings may be listed for 10am in the morning but not happen till hours later. Parents, solicitors, barristers, McKenzie Friends, Children’s Guardians and CAFCASS Officers all sit twiddling their thumbs as the clock ticks on. That time is invariably used for negotiation to see if parents will compromise or change their position. A good number of cases never proceed to a contested/final hearing because compromise is reached, and it is quite common for consent orders to be made by the court (where both parents agree to the judgment) when this happens (or decide no order is necessary under the ‘no order principle’).

Mediation is also attempted outside of the court building during proceedings by CAFCASS and Local Authority Social Workers (if involved). Sometimes it is simply more appropriate for them to have oversight of the mediation and lead it when there are identified welfare and safeguarding issues which also need consideration and where one party might be pressurised into agreeing something which is not in the children’s best interests.

I don’t always agree with what the judiciary do, and believe that our system of family law could be much improved, but to accuse the judiciary of not encouraging mediation is sweeping, wrong, and ignores what happens in court on a daily basis.

The final judgment by the District Judge didn’t stop contact but it limited the mothers contact to supervised upon the advice of one of the UK’s leading (and most respected) child and adolescent psychiatrists. Courts rarely limit contact to a supervised basis unless they see a realistic prospect that matters may move back to normal arrangements. Mediation might have a role in that, but it’s not a matter for the father to change his views and opinion, but for the mother to change her behaviour towards the child and the father which was the reason for supervision and the decision on residence.

It should also be noted that in the Minnock case, serious allegations were made by the mother (later found to be false) and welfare concerns accepted over the mother’s manipulation of the child. One of the country’s leading psychiatric experts recommended the course of action which the court accepted. Given the psychiatrist and district judge had full sight of the evidence, and the CEO of National Family Mediation does not, the ‘definition of madness’ would be to imply that mediation would have been more successful in this case, or is now, without possession of the facts.